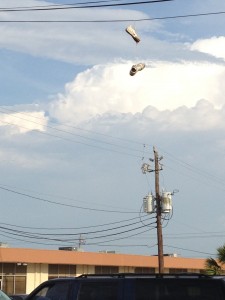 I used to feel that I was jumping out of my skin. As a young person, I had no idea how to relax.  Didn’t even know what it meant to be relaxed.  My muscles and nervous system were always on high-alert, waiting for someone to attack me, waiting for something to go wrong . I was hyper-vigilant , waiting for the other shoe to drop, so to speak.

In my 33rd year, I took a workshop in California that focused on releasing and restructuring negative beliefs. It was a surprisingly physical workshop. For two days, we participants did physical exercises including pounding pillows until we were totally without tension.  On the second afternoon, I was so released that I could not keep my head up. I had to finish the afternoon lying down because I could not sit up. But I was in a state of release that I had never experienced before, not only physically relaxed, but without mental or emotional negativities!

In this new state of consciousness, I was aware of being relaxed deeply in my physical body.  I was comfortable in my body, no longer jumping out of my skin.  It was wonderful! For days, I simply enjoyed walking and moving my body.  Every movement felt joyful and pleasurable.  Life felt like a dance.  And, I was no longer hyper-vigilant.

Years later, some friends taught me a grounding meditation that had the same effect on me without having to pound pillows until spent. This grounding exercise redirects your attention into your physical body, helping you to get out of your head and get into your body. I have used it personally for many years to relax, get present and calm my anxieties and nerves. It has also become  a significant part of my process for transforming stage fright and fear of public speaking.

I am not a doctor or a psychiatrist, so I can’t address anxiety from a clinical standpoint.  But as someone who has experienced strong anxiety,  performance anxiety and fear of speaking, I can recommend grounding as a very helpful technique.

Below is a short video of my guiding the grounding exercise. You can watch it and use it as you wish.  If you want an audio version, you may purchase it at my website. 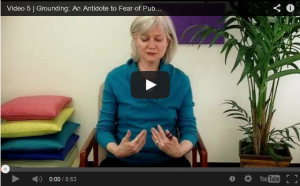 Get The Latest Blog Updates

Sandra Zimmer has coached thousands of professionals for public speaking and for overcoming fear of public speaking. Sandra suffered terrible stage fright, but she had the right set of training and experiences to figure out how to transform public speaking anxiety into radiant presence and confidence to speak from the flow state. She brings her training in psychology, acting and directing, meditation, spiritual psychology and voice to help you shine when you speak.... Read more

Watch, listen and learn as Sandra teaches online how to transform your fear of public speaking.

It's Your Time To Shine: How to Overcome Fear of Public Speaking, Develop Authentic Presence and Speak from Your Heart