If you are feeling dissatisfied with your life, it could be because you have not learned to speak up in public in order to fulfill your soul’s desire to make a difference. I believe we each have a gift to give the world. We each have some contribution to make that adds value to humanity and meaning to our lives. To give your gift fully always requires speaking about it in public.

Surprisingly, fear of speaking in public is one of the signs that you may have an important message to share that is valuable to others. After coaching thousands of individuals to overcome fear of public speaking, I realize that those individuals with public speaking fear turn out to be the most amazing speakers, because they are full of feelings and emotions. Their feelings and emotions are up to the surface and can be tapped to help them express with passion.

If you have a lot of public speaking fear, you have the potential to be a star at speaking! Here is the thing that will set you free. You don’t have to be the world’s greatest speaker. You don’t have to be perfect in order to make a big difference in the world. You only have to learn to speak up in public by being authentic, by simply being yourself.

I want you to know that when you learn to speak up in public, life will start bringing you the opportunities to give your gift. Your soul will use you to make the difference you feel called to make. You won’t have to struggle for it, you will only have to receive those opportunities and say yes. 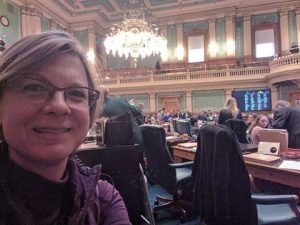 I had not heard from Christine Gust for several years. Christine called me this week to share that she had just spoken at the Colorado State House of Representatives. She said, “On Thursday I got to go to the State Capitol as part of my district’s day there. We observed the legislative process during the General Assembly, talked with House Leadership at lunch, and attended several committee hearings. I also gave my first testimony at a committee hearing. The bill was about amateur wine tasting contests. And my partner and I are amateur wine makers, so it was a perfect opportunity to share!”

Her voice was buoyant with excitement and pride for speaking up. She went on to say, “I have been feeling a desire to contribute to my community but didn’t know how to make it happen. When the opportunity arose to speak during my visit at the state capital, I was able to say yes. Years ago, I wouldn’t have had the courage to do this on the spot because I was terrified of speaking in public. But, your classes on Speaking from the Heart gave me the confidence to speak up on the spot!”

Christine recalled her notes from my Speaking from the Heart Group Speaking program to capture ideas quickly.  She remembered to ground herself to stay present and calm.  She allowed herself to speak from her heart without trying to be perfect.  she shared how her speech just flowed and how it much fun it was.  Mostly she was proud of herself for being able to say yes to contribute her ideas and to stand up for her beliefs and values in a public arena.

Here is the point I want to reiterate. Once you have learned to speak up in public, you automatically open the flow of support from your soul. Life can start bringing you lots of opportunities that you would have not attracted when you were not willing to speak up.  In a short time after her debut speaking up at the state capitol, Christine Gust was invited to speak at two other legislative committee meetings, one at the state level and one at the city level in Boulder.

Now she has the courage and confidence to accept the invitations coming her way. Christine is beginning to follow her soul’s passion to make a difference in the world. What difference can you make when you learn to speak up in public?

Get The Latest Blog Updates

Sandra Zimmer has coached thousands of professionals for public speaking and for overcoming fear of public speaking. Sandra suffered terrible stage fright, but she had the right set of training and experiences to figure out how to transform public speaking anxiety into radiant presence and confidence to speak from the flow state. She brings her training in psychology, acting and directing, meditation, spiritual psychology and voice to help you shine when you speak.... Read more

Watch, listen and learn as Sandra teaches online how to transform your fear of public speaking.

It's Your Time To Shine: How to Overcome Fear of Public Speaking, Develop Authentic Presence and Speak from Your Heart